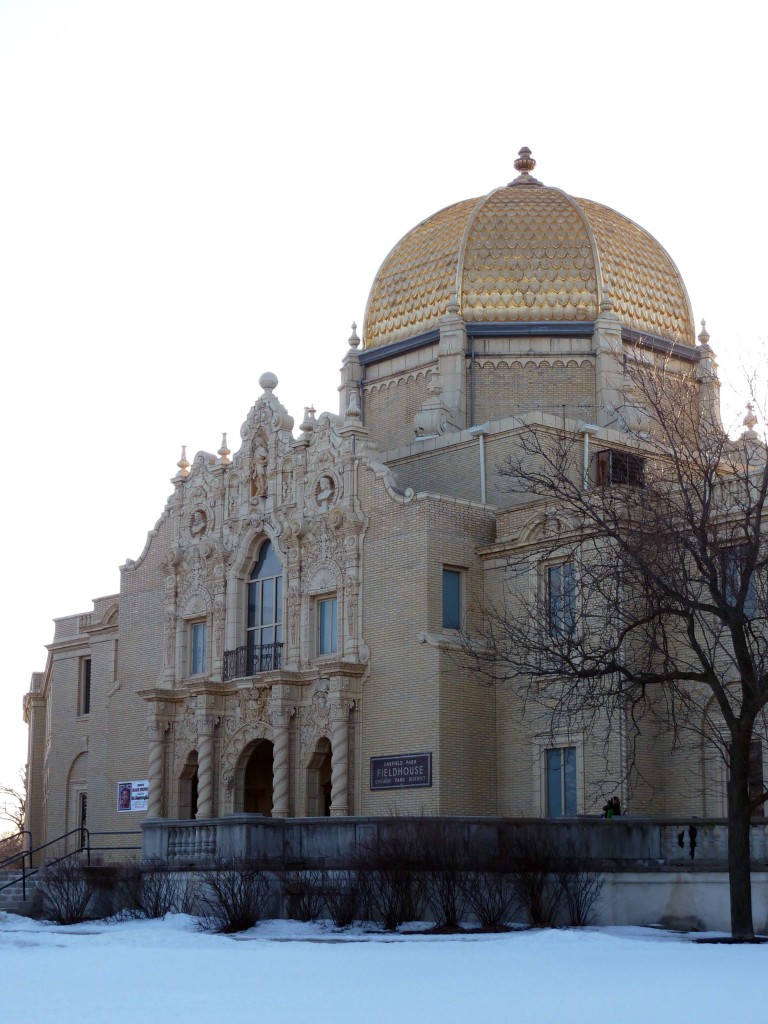 There’s an exciting building around every corner of Chicago – a city famous for its architecture. But even so, you’d think that after several years of searching out Chicago’s notable buildings eventually you would run out of ideas. And then just when you think you’ve seen it all, you come across the Garfield Park Fieldhouse.

Known to many in the area simply as the “Gold Dome Building,” its ornately sculpted facade is as impressive as its gold leaf dome. The building was designed in the Spanish Baroque Revival style – seen especially in its elaborately decorated entrance. Baroque architecture (characterized in great part by a dramatic use of extravagant materials) was popular in Spain from the mid 17th to mid 18th centuries. The style then found its way to Spain’s colonies in South and Central America during the 18th century. And it came back into fashion in 1915 through the Panama-California Exposition in San Diego. Bertram Goodhue was the chief architect in charge of the fair, and he happened to be a proponent and scholar of the Spanish Baroque style. The Garfield Park Fieldhouse was most likely modeled after Goodhue’s design for the entrance of the fair’s California State Building designed in the Spanish Baroque Revival style. 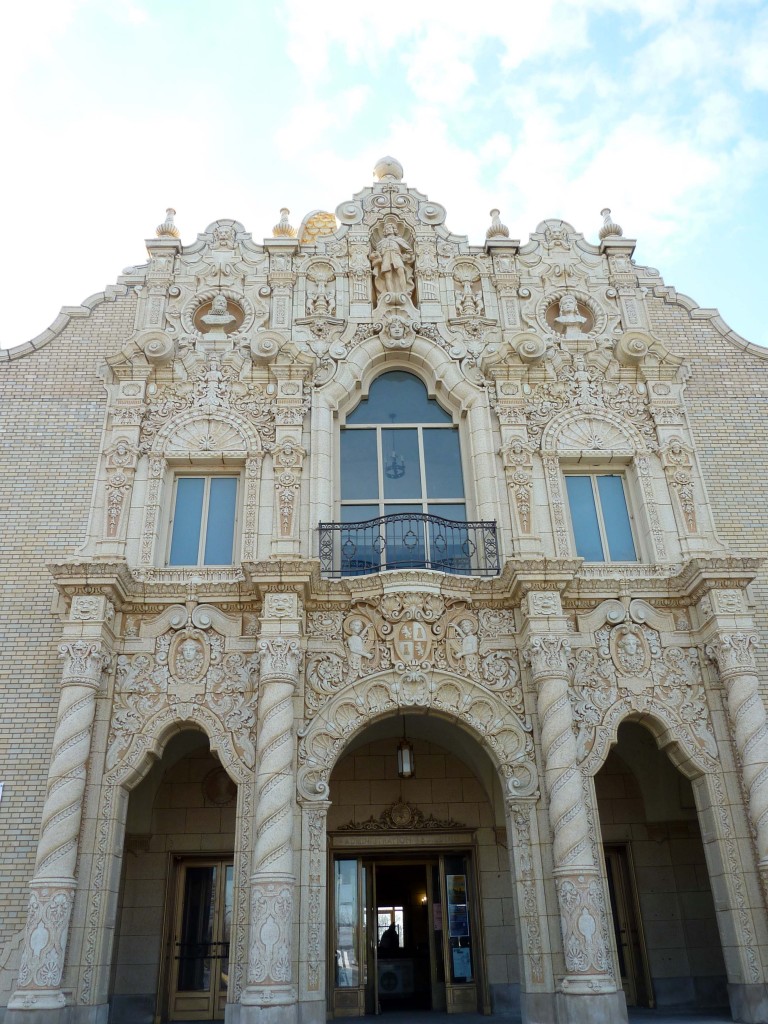 It’s a flamboyant building. Terra-cotta twisted columns, sculptural figures, numerous cartouches, pinnacles, niches, scrolls and scallop shells decorate the front and back entrances. Above the middle window on the front of the building is a statue of French explorer Robert Cavalier Sieur de LaSalle. And the bust to his left is believed to be Christopher Columbus.

With marble walls, a terrazzo floor, and a two-story 50ft rotunda – the building’s interior is every bit as extravagant as its exterior. Low-relief sculptured panels dedicated to such themes as art and architecture, Chicago’s parks, and the Illinois highway system decorate the walls of the rotunda. They were sculpted by Richard W. Bock who frequently worked with Frank Lloyd Wright on a number of his local designs such as his home and studio and Unity Temple (both in Oak Park, IL).

The Fieldhouse was designed by Christian S. Michaelsen (1888-1960) and Sigurd Anton Rognstad (1892-1937) and was completed in 1928. The two architects of Norwegian descent formed a partnership that would last 17 years until Rognstad’s untimely death. Michaelsen & Rognstad served as the architects for the West Park Commission from 1927-1929 – one of the most critical times in the Commission’s history. It was during this time that the West Park Commission received a $10 million bond. They used the money to build 12 new park buildings all designed by Michaelsen & Rognstad. The Garfield Park Fieldhouse was built to be the headquarters or Administration Building for the West Park Commission. The basement also contained a large squad room for park police, prisoner cells, a warming room and refreshment booth for ice skaters, and storage for pleasure boats. However, it only served its original purpose for six years before all of the parks were consolidated into the Chicago Park District in 1934, and the building became a fieldhouse as it remains today. 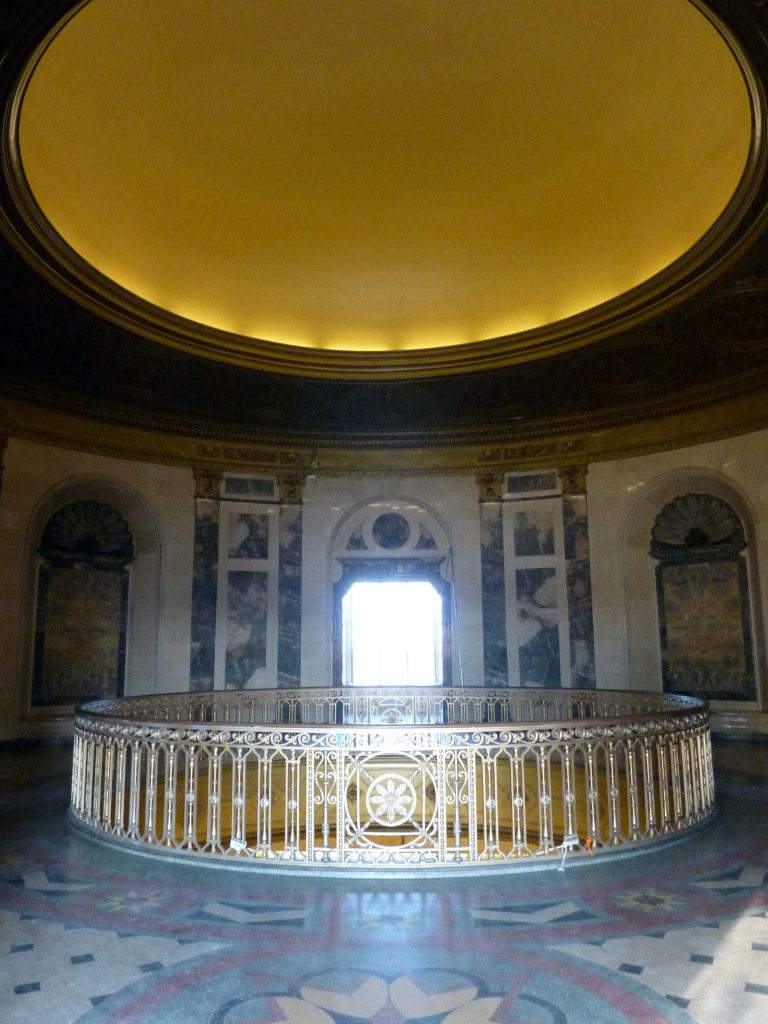 Today the fieldhouse contains the Chicago Park District’s regional offices, as well as a number of recreational uses such as a dance studio, gallery space, theater, and boxing ring. In 1983 an addition was made over the west lagoon – a gymnasium topped by an outdoor swimming pool. Recently landmarked, the building completed a major renovation and restoration in 1995, and more improvements are still planned.

BLUEPRINT has also covered another Michaelsen & Rognstad building: the On Leong Merchant Association.

And here is the website for the Chicago Park District which also gives a good background on the history of Garfield Park.