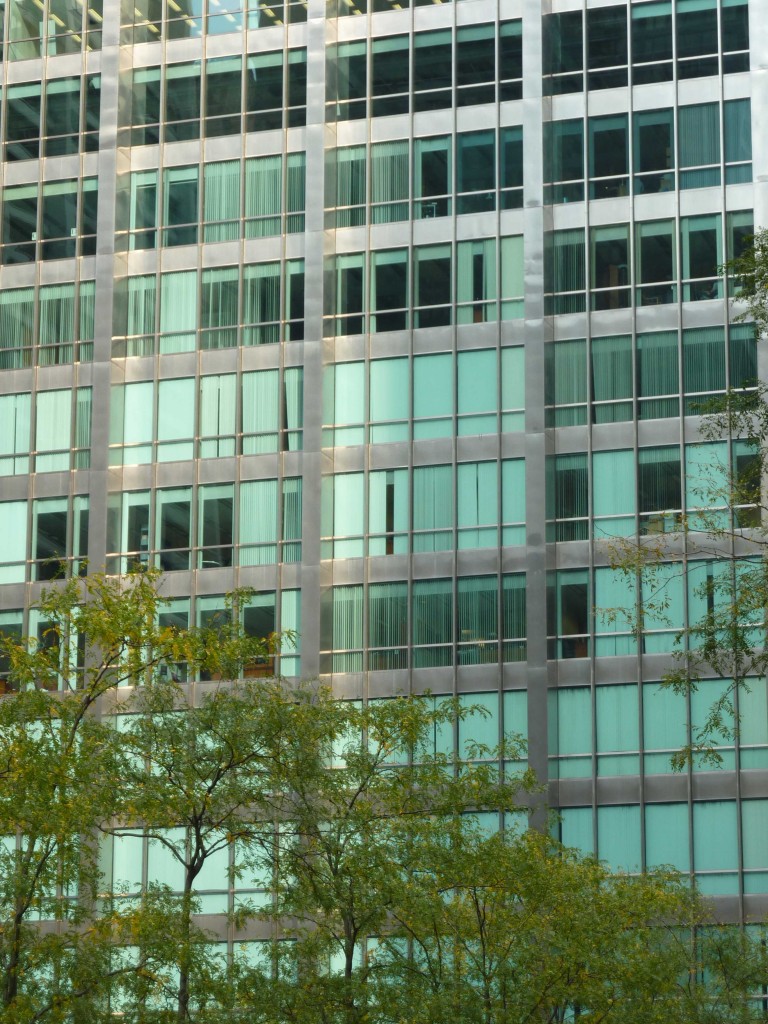 Imagine this: it’s the year 1956 in downtown Chicago. Massive old masonry buildings define the landscape. The Prudential Building, completed in the previous year, was the first skyscraper built downtown since the Field Building (1934) twenty years earlier. Though even the Prudential appears somewhat dated, as it still bears the influence of the art deco style prominent before the construction hiatus caused by the Depression and WWII. However at the north east corner of Monroe and Dearborn streets something new is happening – the rise of the Inland Steel Building. Inland’s glistening stainless steel and expansive sheets of tinted glass will usher in a new period of modernity for Chicago. Flash forward to the year 2011, and the Inland Steel Building (completed in 1958) still stands out for its elegant modernity, as it surely will for years to come.

The Inland Steel Company was founded in Chicago in the fall of 1893. And as Joseph Block, a former company president, once said, “We’re a Chicago company and we’re going to stay here.” Inland Steel started as a small gamble in the height of a major economic depression, but by the 1950’s they had increased steel production to more than 6,500,000 tons, making the company the 8th largest steel manufacturer in the country. Soon Chicago would repace Pittsburgh as the center of American steel production. And when the company began to outgrow their offices, it made a lot of sense that they decided to build a new modern headquarters made out of steel as a sign of their continued growth. “We wanted a building we’d be proud of, one that spelled steel,” said Leigh Block, a former Vice President of the Inland Steel Company and descendent of one of the company’s founders. Inland Steel and its subsidiary companies manufactured all of the steel forming the structure and cladding of the building.

Inland Steel chose the offices of Skidmore, Owings & Merrill (SOM) to design their company headquarters. Early on SOM declared that they would only design “contemporary” styled buildings. The firm was true to its word and went on to design such buildings as the Willis Tower, Hancock and Trump towers in Chicago as well as the Burj Khalifa in Dubai – by far the tallest building in the world. 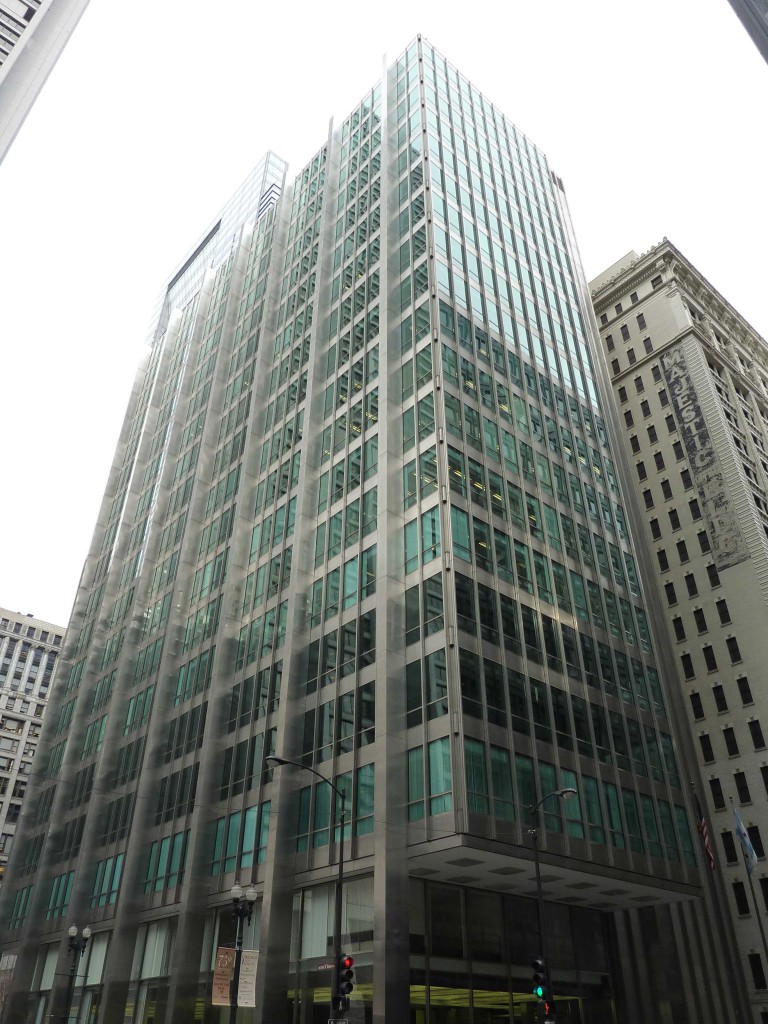 SOM designed Inland Steel in the International Style – a style introduced by Mies van der Rohe. The building broke away from its more classically designed neighbors by emphasizing its volume rather than its mass, regularity or rhythm rather than symmetry, and was marked by strikingly minimal ornamentation. Instead of ornamentation, the tower is distinguished through seven pairs of nickel-chrome stainless steel clad columns (carrying the weight of the structure) that are pushed outside of the building’s curtain wall.

The tower was further innovative for a number of reasons. It made headlines for having the widest clear span ever used in a multi-story building, meaning that every floor boasts open and unobstructed or universal space (another Miesian concept). This was made possible by running 60ft supportive girders beneath each floor between the pairs of columns spanning the length of the tower’s exterior. The heating/cooling distribution system and telephone lines were also run beneath the floors to further clear the interior of obstructions. The floor is made up of a grid of modules that can be lifted to access these systems. Inland’s universal space was also made possible by moving all of the building’s mechanicals such as bathrooms, elevators and staircases to an adjacent 332 ft service tower also sheathed in stainless steel (this layout would not be possible to repeat today as it is against fire code). 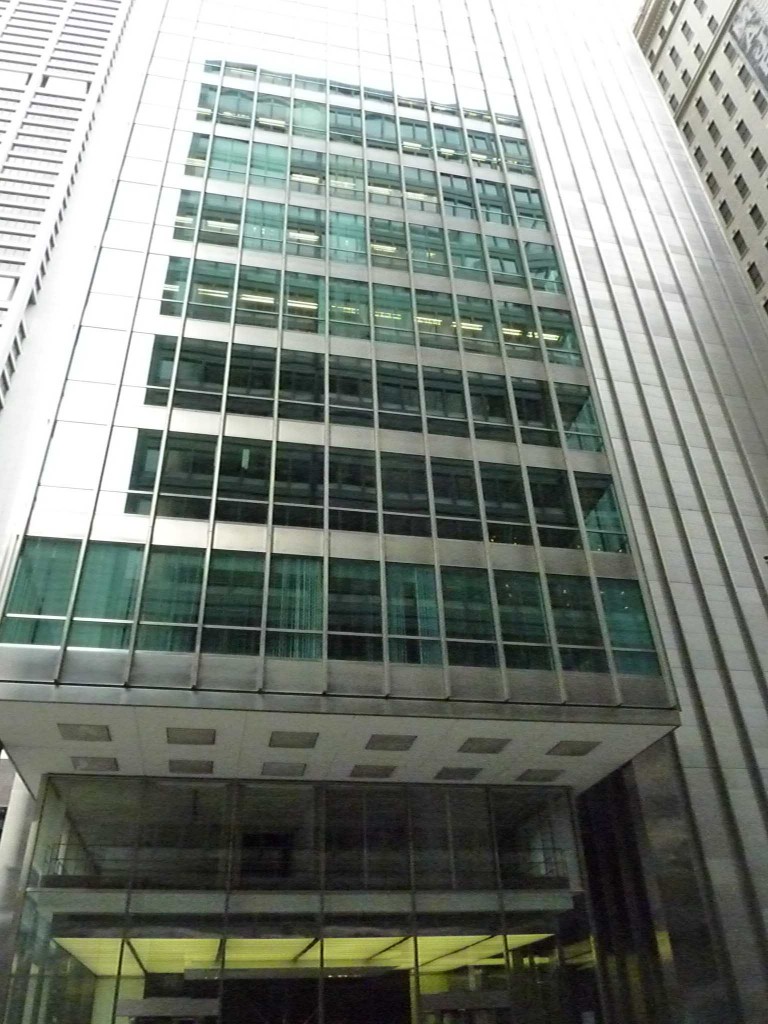 Two prominent SOM architects are credited with Inland’s design: Walter Netsch (1920-2008) and Bruce Graham (1925-2010). And as is all too common with famous and popular buildings, there’s long been a controversy over whom to give credit for Inland’s design. Netsch was the original architect in charge of the Inland project. He is credited with coming up with the building’s layout and pushing all of the mechanicals into a separate tower. But when Netsch was asked to design the US Air Force Academy in Colorado Springs, Graham took over Inland’s design. He kept Netsch’s floor plan, but minimized the number of columns from nine pairs to seven and pulled them out from behind the tower’s curtain wall. Graham also simplified the exterior and came up with the innovative floor module concept.

It’s simpler to agree that the two architects worked together in creating a Chicago favorite – a building that refuses to grow old. As architect critic M.W. Newman wrote upon the tower winning an AIA 25 year honor award in 1982, “In a steel-building city, [the Inland Steel Building] . . . retains a lightness, serenity, and polished grace that continue to make it an influential emblem of modernism.” Thirty years later, it’s still true. 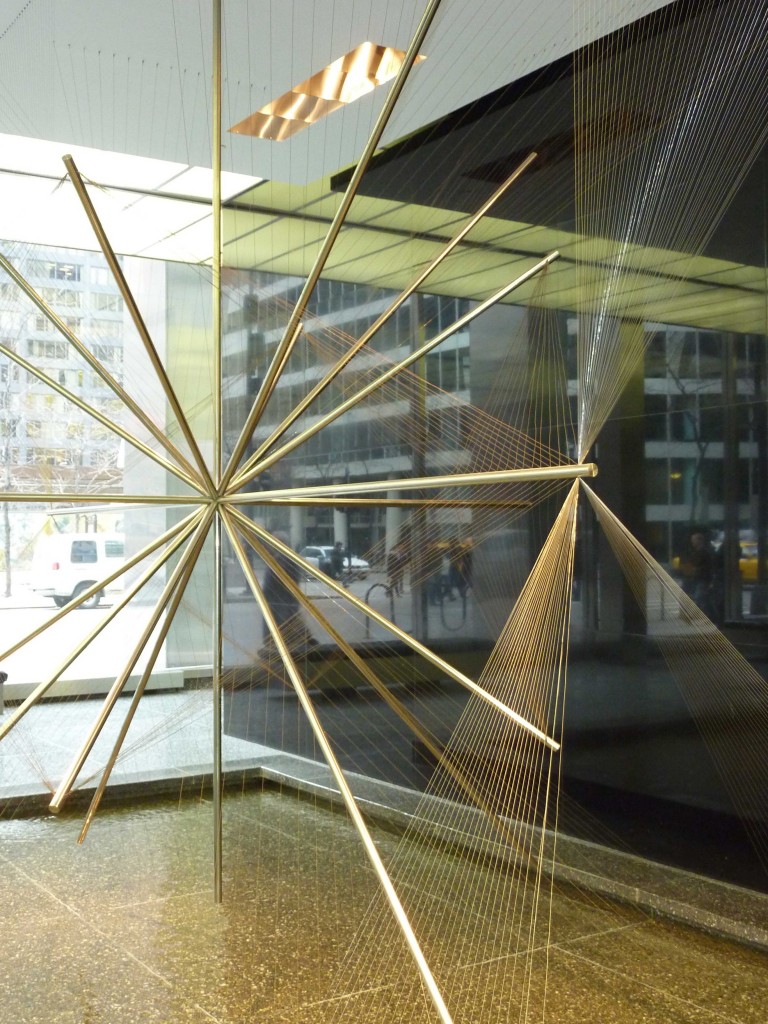 The Inland Steel Company was sold in the late 1990’s, and now Capital Properties and starchitect Frank Gehry own the building. Curious on how Frank Gehry became involved? Here’s an interesting NYT article that will answer that very question. The building recently underwent a renovation to make it more energy efficient and suitable for the 21st century. The building has a snazzy website with some details on the renovation as well as nice photographs of the interior. And if interested, here is SOM’s website, and page on the Inland Steel Building. Inland Steel was awarded landmark status by the Commission of Chicago Landmarks in 1998.