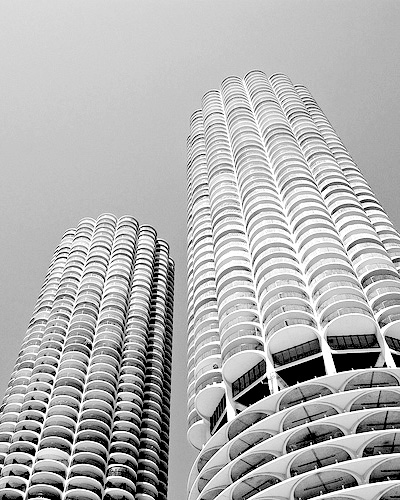 When Marina City was first built between 1960 and 1967 its towers loomed over the surrounding historic buildings and parking lots on either side of the Chicago River. Today glitzy new skyscrapers frame the complex, yet the Marina Towers still remain as two of Chicago’s greatest icons, and likely will for time to come.

When built, the towers were both the tallest concrete structures and tallest residential towers in the world. More importantly, they were an experiment in a new urban philosophy: building a city within a city. Chicago had experienced a long period of suburban flight, which left an abandoned and deteriorating downtown. Marina City was part of an effort to reintroduce downtown Chicago as an attractive place to live. Marina City is actually a complex of five structures: two residential towers (60 stories each, with the first 18 stories reserved for parking), an office building (10 stories), and a theater building all standing upon a large commercial platform. Every amenity imaginable could be found within – such as a swimming pool, gym, ice skating rink, bank, barbershop and even a grocery store. And of course there’s still the ever-popular marina – hence the name. The first of its kind, it truly was a city within a city. 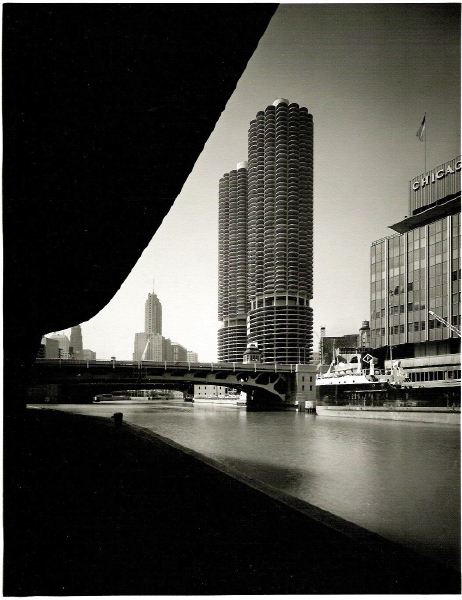 An organization especially invested in the city’s revival – the Janitor’s Union (more formally called the Building Service Employees International Union) – financed the building of Marina City. When completed, Marina City would provide work for 100 janitors within the complex, and a downtown revival would promise work for many more still. It wasn’t uncommon at the time for unions to invest health, welfare, and pension funds in low-cost housing. The Janitor’s Union followed suit. Charles (Chuck) Swibel, a realtor and later chairman of the Chicago Housing Authority, proposed the idea to the union and was integral to pushing the plan to fruition. A staunch supporter of Mayor Richard J. Daley and his plans for downtown revitalization, Swibel was especially enthusiastic about the project. But it was architect Bertrand Goldberg who was responsible for Marina City’s design and instant emergence as a Chicago icon.

Bertrand Goldberg (1913-1997) was born and raised in Chicago. After studying architecture at Harvard, in 1932 at the young age of 19 he left for Germany to study at the Bauhaus – the greatest school of modernist art, architecture and design of its day. While there he apprenticed under Mies van der Rohe and his partner Lily Reich. He only attended the Bauhaus for one year before it was closed by the Nazi regime. He eventually followed Mies back to the Armour Institute of Technology (today IIT) where he was the director of their architecture program. Despite his admiration for Mies, he never adopted the right angle that was so central to his mentor’s design philosophy. Instead Goldberg centered his attention on the circle. 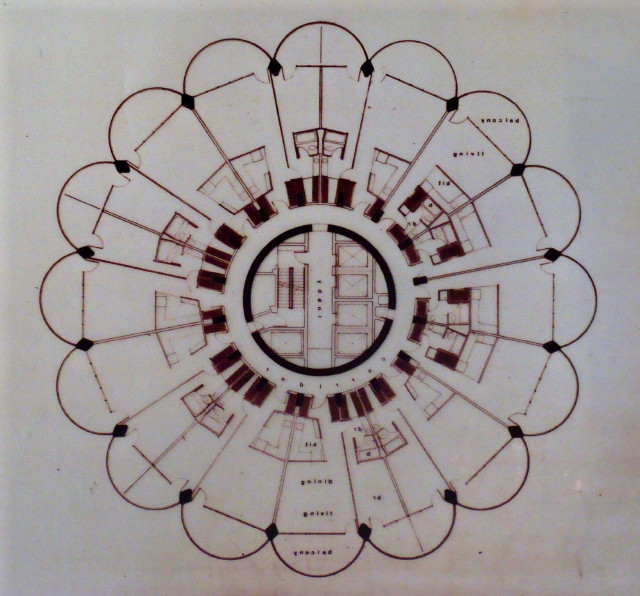 The towers were the first circular apartment buildings in history. And Goldberg’s choice in the circle was based on more than just aesthetics. The circle gave the highest ratio of usable floor space to exterior skin. And to Goldberg the circle offered still something more. He once said,  “(I) wanted to get people out of boxes, which are really psychological slums . . . those long hallways with scores of doors opening anonymously are inhuman. Each person should retain his relation to the core. It should be the relation of the branch to the tree, rather than that of the cell to the honeycomb.”

The structure of the towers is in fact like a tree. All of the buildings’ mechanicals are located in the cores of each tower (or the “tremendous tree trunk(s)” as Goldberg called them). On every floor 16 reinforced concrete beams radiate out almost 40ft from the core – just like branches – to 16 exterior columns. And similar to a tree, the structure of the towers is completely exposed and celebrated.

In Chicago the Marina Towers are rarely related to trees, though they are often compared lovingly to corncobs – making the towers more than just icons, but great monuments to the Midwestern fields surrounding this metropolis.

All of the information for this article came from reading Igor Marjanovic and Katerina Ruedi Ray’s fantastic new book entitled, “Marina City: Bertrand Goldberg’s Urban Vision.” Their book goes into far more detail than this post, covering everything from the politics surrounding Marina City’s construction to the Towers portrayal in contemporary culture . . . and goes highly recommended.

And to learn more about Bertrand Goldberg explore this website devoted entirely to him! One of his Chicago buildings, the Prentice Women’s Hospital, is currently threatened with destruction. Follow along the efforts to save this building and be sure to become a fan of Save Prentice on facebook.

And finally the construction of the Marina Towers was an impressive feat. It was also accomplished at high-speeds: the towers were built at a speed of one floor per day on alternating towers. Watch this fun old video showing the construction of Marina City produced by the Portland Cement Association of Skokie: “This is Marina City (Part 1)” . . .