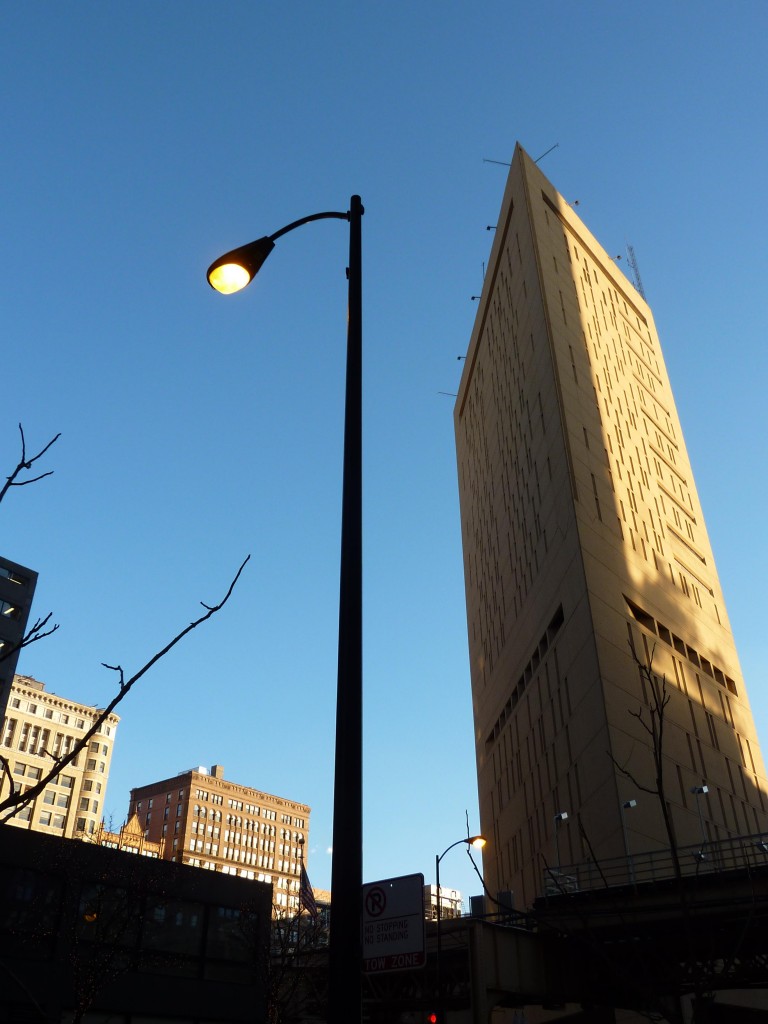 When we think of prisons, sprawling complexes in the middle of nowhere with high barbed wire fences generally come to mind. What we don’t think of are skyscrapers in the middle of a bustling city. The Metropolitan Correctional Center is just that – a skyscraper-prison in the Loop. Not only is there a prison nestled in the heart of Chicago, but it makes a lot of sense to see it there.

The Metropolitan Correctional Center was built as part of a federal demonstration program in humanitarian prison conditions. The program commissioned two other Metropolitan Correctional Centers: one in NYC designed by Gruzen & Partners, and another in San Diego designed by Sadler & Bennett. The prisons were intended to house mostly pre-trial prisoners, or prisoners serving only short term sentences. The bureau commissioning the prisons stipulated that each prison had to be divided into self contained units accommodating no more than 50 inmates per unit. This organization allowed the prisons to be easily separated: men from women, old from young, violent from non-violent offenders etc. Prisoners would be given individual cells, and free access to lounges and recreation areas (one per unit).

Harry Weese designed Chicago’s Metropolitan Correctional Center, completed in 1975. It’s no surprise why Weese was awarded the commission — he was famous for his creative problem solving skills (the architect designed the DC metro system after all). Weese’s solution to the bureau’s prison design was revolutionary. He designed a prison in the shape of a skyscraper – a triangular skyscraper no less. A skyscraper for a prison makes sense. With multiple floors it’s easily divided. It’s a 27-story building, with the administrative offices below and prison cells above. A large exercise yard sits on top of the roof (this was made possible by moving the building’s mechanical equipment onto the 10th floor – marked by deep indentations on the façade). And it’s well disguised as a skyscraper — visually blending into Chicago’s towering skyline. 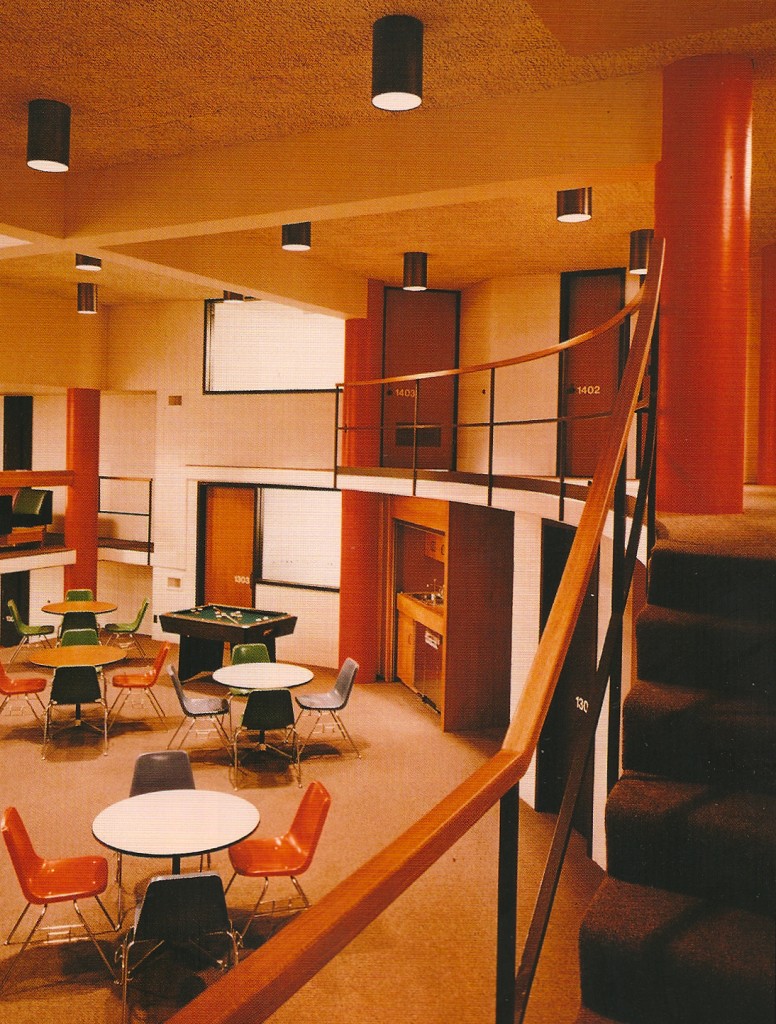 Why the triangle? There are a few reasons. As Weese said, “The triangular plan provides the most perimeter for the space. We needed perimeter so each room could have an outside window.” It also cut out the need for long wasteful corridors. It’s a much more efficient way of organizing space. Placing the rooms on the outer edges of the building leaves the inner core of each unit free to be used as a lounge and dining area. Each unit of the prison is bi-level, with an open two-story lounge area in the middle. The stairs and elevators are located in the building’s three corners. Efficiency wasn’t the only reason Weese chose a triangular shape for the building though. As he said, “I’ve always wanted to do a triangular building. I find the triangle very sculptural, more interesting than a rectangle or circle.” Built of sand colored reinforced concrete – it’s also an attractive triangle.

For a prison, the Metropolitan Correctional Center isn’t half bad. There are no cellblocks with long intimidating corridors. No steel cages. The interior is carpeted and colorful. And each private room has a floor to ceiling 5 in.x7.5 ft. window. 5 in. was the Bureau of Prison’s maximum allowance for window width without bars (Unfortunately, after an attempted window escape, there are now bars running across the windows).  The windows make for unconventional though elegant ornamentation for the building, which has often been compared to both a wedge of swiss cheese or an IBM punch card.

So it makes sense for a downtown prison to be in the shape of a skyscraper – even better if that skyscraper happens to be triangular. But why have a prison in the middle of downtown Chicago? That makes sense too. It’s only a couple of blocks away from the courts at Federal Center. And the central location is much more accessible for both lawyers and visiting families alike. The better question might be, why not have a prison in downtown Chicago? 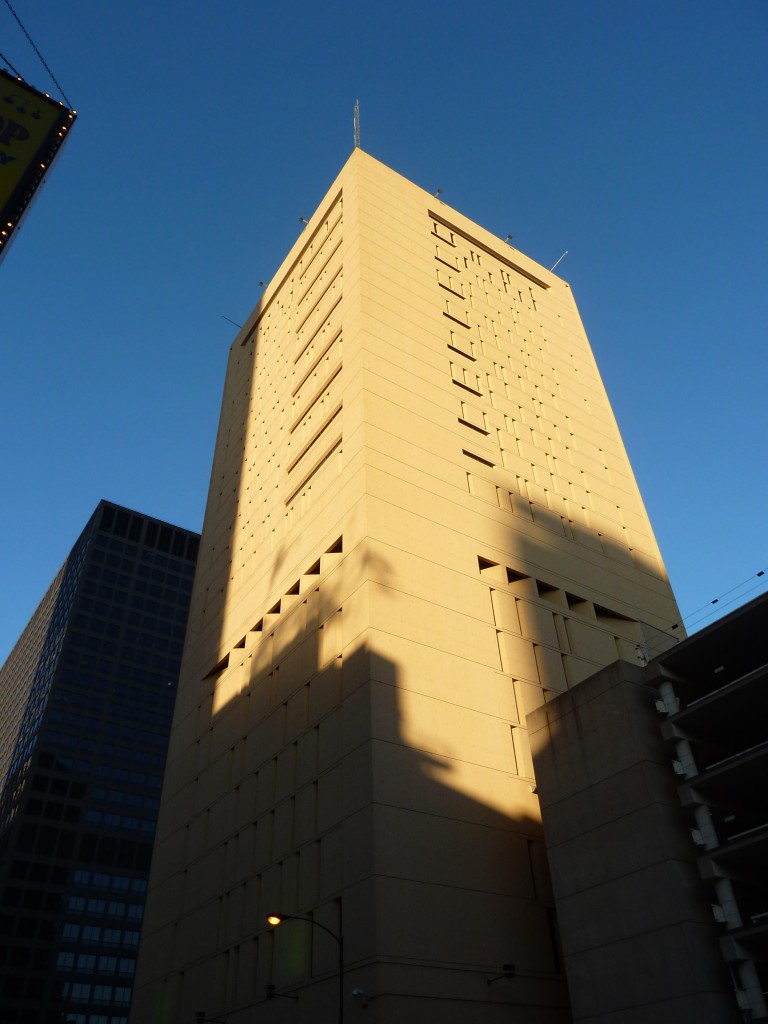 You can’t get very far into the Metropolitan Correctional Center without breaking the law, but no one will stop you from walking into the front entrance and checking out the beginnings of their intense security setup (Hidden from view is a control room that has the ability to command all of the building’s doors, TV’s, elevators, telephones and in the most dire situations – knockout gas). The system has not stopped a few from attempting escape though. Rumor has it that someone attempted escape once via helicopter from the building’s roof, and this is why a net now covers the rooftop exercise yard. So it’s hard to get in, and hard to get out. But if you walk by be sure to look up. You might just see a prisoner or two doing some jumping jacks.

BLUEPRINT has covered a couple of other Harry Weese buildings: The River Cottages and Chinatown Square. Be sure to check them out too! What do you think of our prison in the Loop?