Noah Vaughn is Chicago’s modern day Richard Nickel. An intrepid urban explorer, he documents vacant decaying buildings through stunning photographs. The following photographic essay will (hopefully) be the first in a series of entries written by guest bloggers who offer different perspectives on the field of architecture. 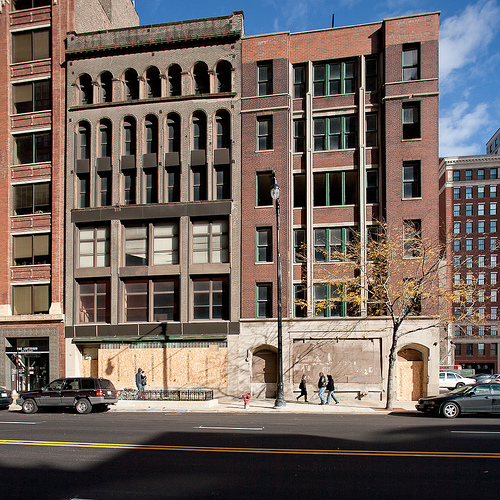 While Chicago’s building preservation community was wringing its hands over the impending demolition of the historic (but vacant and dilapidated) Johnson Publishing-owned YWCA building at 830 South Michigan Avenue, two other nearby buildings owned by Johnson were being torn down without much notice. Too bad, because while they didn’t have the historic pedigree of the YWCA building, they were noteworthy enough to merit a second look.

To be fair, I probably would not have noticed the buildings at 825-831 South Wabash either if it wasn’t for the old YWCA. I went there one afternoon to take some photos of the building facade, and I hoped to find a way inside to get some interior shots. I walked around back looking for an entrance, only to find the building sealed shut. But on the other side of the alley were two other buildings being prepped for demolition. I was dead set on photographing the inside a vacant building, and if I couldn’t get into the YWCA, these other ones would have to do.

At the time, I had no idea that the publisher of Jet and Ebony Magazine once owned the two Wabash buildings as well as the old YWCA. I tried to find more information about 825-831, but did not come up with much. They were built in 1906, probably for offices and light manufacturing. The buildings were purchased by Johnson sometime in the 70’s, probably as a real-estate investment (this information came from an online architecture forum and is thus a bit sketchy.) The buildings were barely used, and in 2008 (or so—more sketchy information) the financially strapped publisher sold the buildings to East-West University. 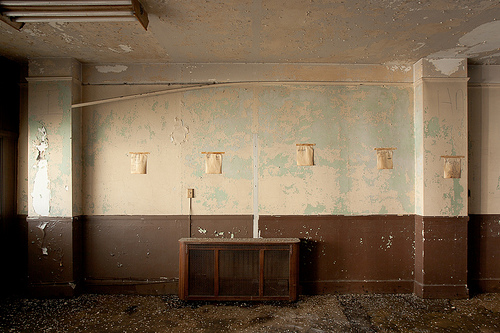 Getting into 831 S. Wabash was easy enough. Security at this demolition site consisted of a hastily constructed fence in the adjacent parking lot, with gaps wide enough to walk through. My only concern was being spotted by someone walking by on Wabash. I waited until it seemed like nobody was looking, went around the fence, and ducked into a hole in the side of the building. After waiting a few minutes for my nerves to calm, I turned on my flashlight and started to poke around.

Much of the interior looked like a turn of the century, nondescript office/warehouse building, stripped bare. It took a bit of exploring before I found anything left behind by the previous building tenants. One of the rooms had photos of civil rights leaders taped to the wall. Digging through a pile of debris, I found a Johnson Publishing shipping invoice from the 1970’s and some stationary from the offices of Ebony magazine. My favorite find was a poster advertising the “Black Book”, a directory of “Chicago area black owned-operated businesses”. I guessed that Johnson Publishing once used parts of the building as a warehouse and shipping department. Whatever went on here, it was obvious that the building had not been used for anything in at least a decade. 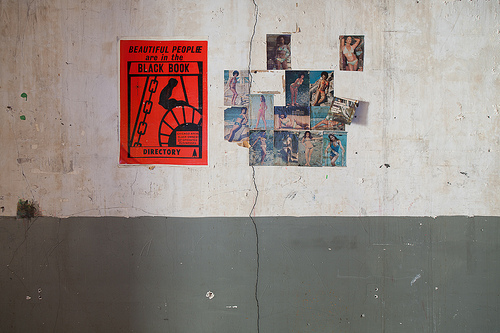 The two buildings were actually connected on several floors, effectively making it one building with two facades. A few days after taking my photos, I read that 825-831 were being torn down because they were a safety hazard. The concern was understandable: floorboards were badly warped, some of the wood-beamed ceilings were sagging, and the few interior walls that remained looked like they were about to cave in. The two narrow stairwells would not have passed even the most lenient building inspection. But unlike most other vacant buildings that I have visited, there was no graffiti tagging on the walls, and what little evidence I found of squatters looked very old. 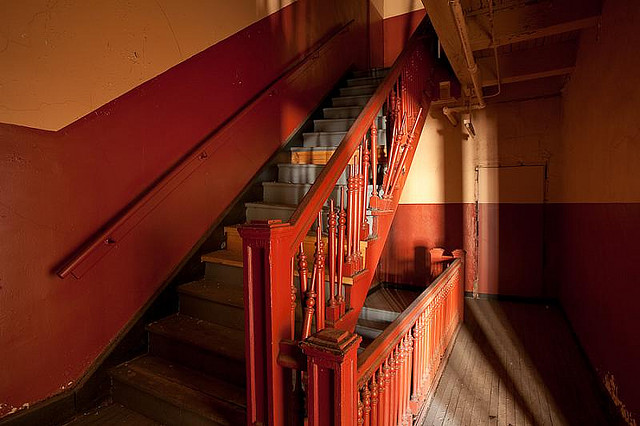 I spent the better part of that afternoon and the next day taking photos inside 825-831 South Wabash. The buildings were not especially remarkable–just floor after floor of empty space, without much variation other than the paint on the walls. But in a neighborhood where many other older loft buildings have been either demolished or converted into upscale condos, 825-831 South Wabash were relics of a time when the South Loop was a blue collar commercial area. I thought it was important to make some sort of record of them before they disappeared. Plus, I enjoyed spending time alone inside a quiet, rotting loft building while outside the upscale South Loop area went about its business.

After I felt like I got enough shots of the interior, I went across the street to get a few more photos of the handsome facades. Built out of dark brick with subtle details, they were the most notable feature of the buildings. A man stopped to ask me why I was taking photos of the buildings. “Just a hobby…” We talked for a few minutes about how the neighborhood had changed. “Well, it’s a good thing someone is taking pictures, because a lot of these places will be gone,” he told me. 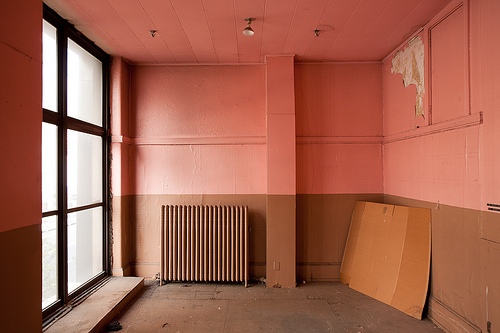 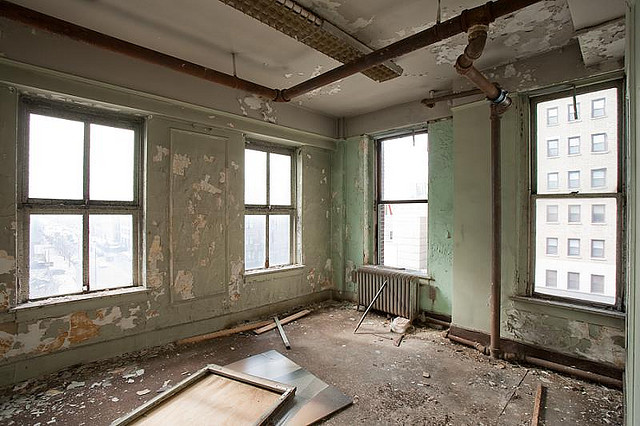 825-831 South Wabash were completely demolished by December 2009, and the land is now being used as a parking lot.

To see more of Noah’s photographs of the 825-831 S. Wabash buildings click here.  And be sure to visit Noah’s website and photo blog full of similarly striking photographs from many other demolished or soon to be demolished Chicago buildings. Noah was also just featured in an interview on Chicago Photobloggers – check it out!