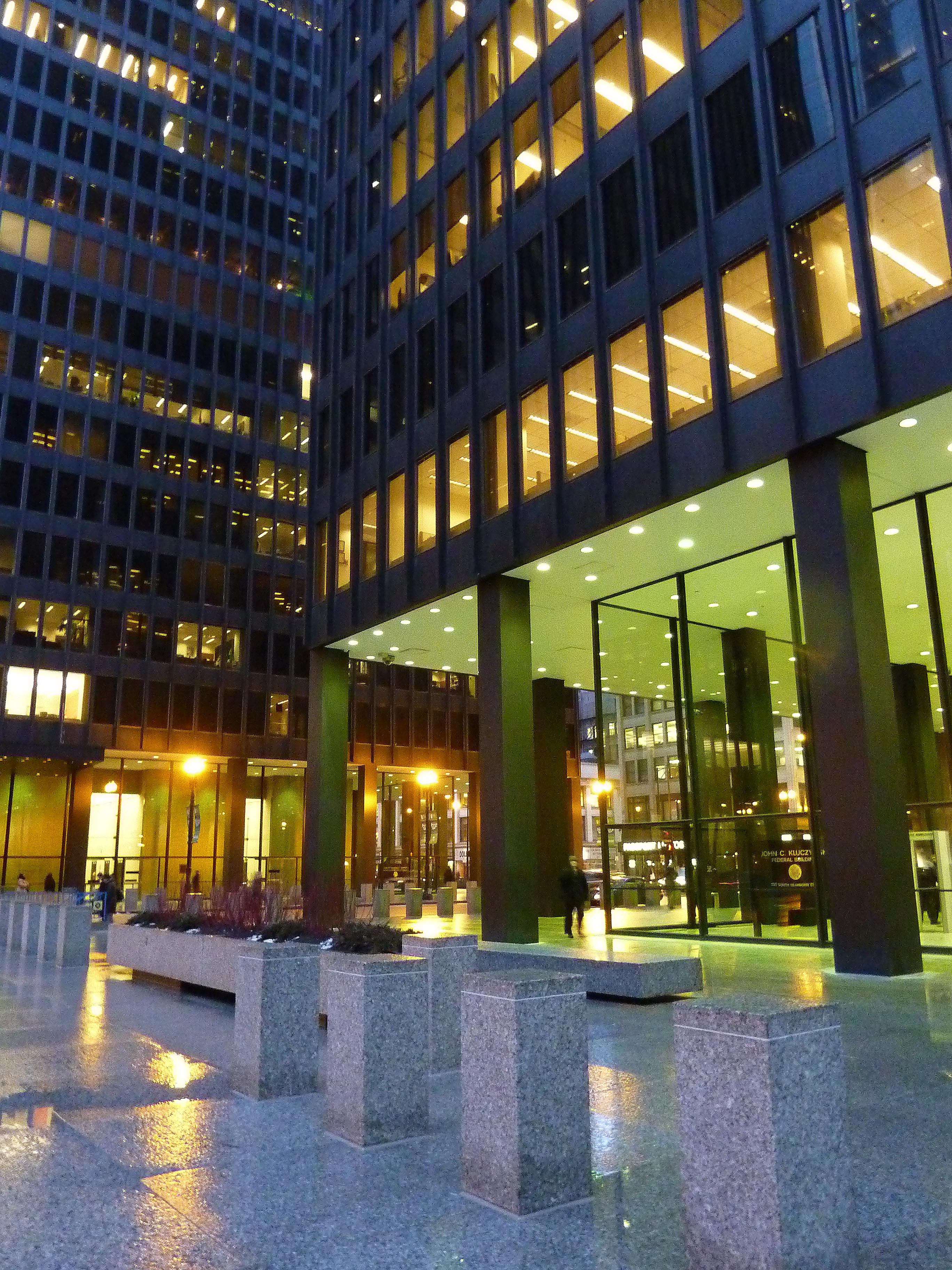 Dearborn between Jackson and Adams

The steel and glass buildings of Federal Center are simple and frozen at first glance. The many people who stop engaging with the Federal buildings at this point label them as austere, cold or inhuman. But those who are lucky enough to keep looking, inevitably find that Mies van der Rohe’s steel structures are just the opposite. They pulse with energy. Repeating bars of steel piers, mullions, and I-beams form the buildings’ metronome.  Panes of glass large and small allow the eye to rest. And then there is the constant movement of lights, reflections and people throughout the buildings and surrounding plaza. The combination is musical. And so, as Mies famously said, “Less is More.”

Federal Center is composed of three buildings – the 30-story Dirksen tower (combined office and courtroom building), 43-story Kluczynski tower (office building), and single-story post office – built over a sixteen-year period between 1959 and 1975. The buildings were built to replace the old domed 1905 Henry Ives Cobb federal building – dated in style even before its completion. While the classically designed Cobb building was almost imperial in its grandeur, Mies’s design is democratic. His buildings are perfectly transparent – fitting for a government that strives to convey a sense of openness. Also important for government buildings is to embody a sense of order – of which there is no shortage of in Mies’s design. 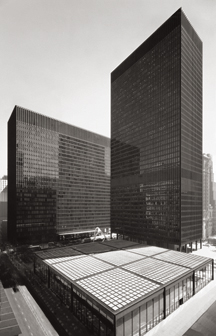 Imagine that the three buildings are sitting on a huge piece of graph paper divided into 4’8” squares – as seen in the lines forming the plaza’s pavement. The squares are the module that the rest of the buildings are similarly built on. Follow the lines. Every line of the pavement leads to the exact center of a key part of a building’s form – such as the pilotis, piers or mullions. The grid continues through the buildings (the same granite used in the plaza is also used inside the lobbies – only polished), and up the buildings – in a repetition of evenly spaced I-beams forming the center’s only ornamentation. The same grid even continues uninterrupted on the roof of the post office. What’s more? The height of the post office is the exact height of the lobbies of the two towers. It’s no surprise that Mies’s other commonly used saying was “God is in the details.”

The details combine to form a perfectly unified whole. Mies’s buildings soar up into the sky sleek and modern. They’re both heavy in how they’re made of velvety black painted steel, and weightless for how they float above the ground over big open glass spaces. Their minimal facades reflect the historic buildings surrounding them. Standing in the middle of it all is Alexander Calder’s flaming red Flamingo sculpture. It simultaneously ties everything together and sends it all into motion. 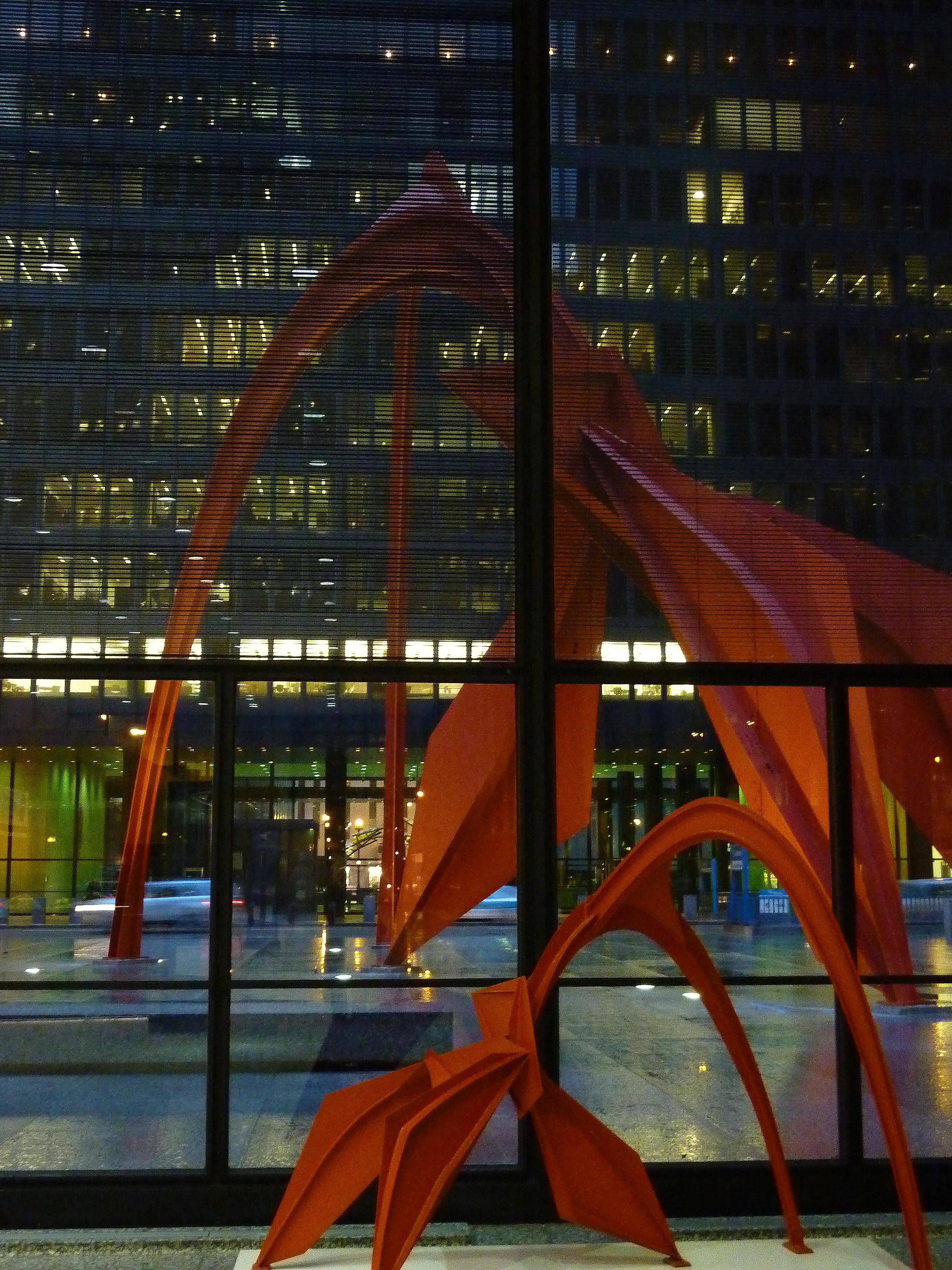 Federal Center was not the work of Mies alone. Though the initial designs were his own, he died in 1969 – six years before the completion of the center. Gene Summers and Bruno Conterato from Mies’s office with the help of associate architecture firms Schmidt, Gardin & Erikson, CF Murphy & Associates, and Epstien & Sons, together carried out Mies’s plan to completion.

And you might have noticed that there’s a lot of construction going on right now on the plaza of the Federal Center. To learn more about this stimulus project read this article.