Louis Sullivan’s design for the façade of the Krause Music Store (1922) has been criticized for not reflecting his famous philosophy of “Form Follows Function” in architecture. This in part means that a building should be honest in revealing its structure and expressive of it’s function. Critics have said that Sullivan’s façade is too elaborate for such a simple building – that instead of it being an extension of the building, it is separate and unrelated. I see it differently. I see a precious music box with its emblematic key, responsible for setting the gears of music in motion, forming the focal point of the façade. What a perfect manifestation of “Form Follows Function”: giving a music store a music box as a home. 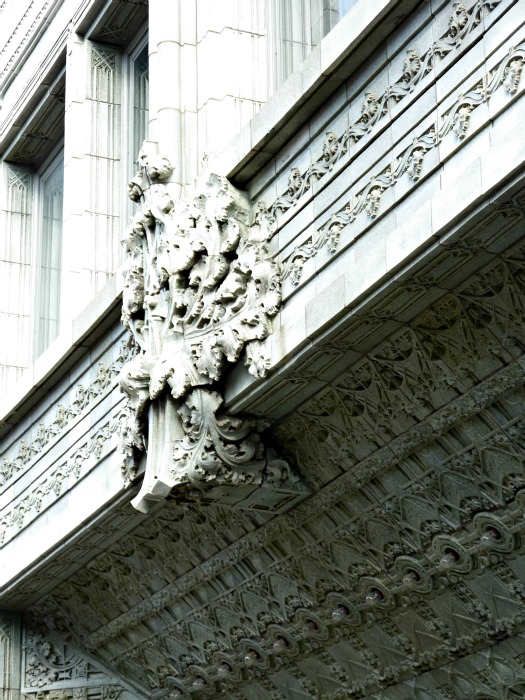 William P. Krause commissioned his neighbor William Presto to design him a music store with a second floor apartment for his family. Presto’s portfolio consisted mainly of ordinary, unadorned low-rise buildings, but he wanted the Krause store to be different. Presto asked the help of his old friend Louis Sullivan to turn the façade, and thus the building, into something special. Lacking for commissions because of the rising popularity of revival style buildings (and his notoriously difficult ego), Sullivan jumped at the opportunity. Sullivan adorned the soft green terra-cotta façade with his characteristic nature-inspired ornament. The high-relief “key” on the second floor is what initially attracts the attention of passersby, but it’s the delicate low-relief ornament of the first floor’s recessed frame which draws you into the store’s large picture window.

The Krause Music Store hasn’t been a music store since 1929 when it was sold to a funeral home. Today it is owned by Peter and Pooja Vukosavich and their design studio: Studio V Design. The Vukosaviches completed an exterior restoration and interior renovation in 2007 with the help of Wheeler Kearns Architects.

This was the last project for famed architect Louis Sullivan. It may not be his grandest, but nevertheless it reflects the creative design philosophy that he built over a lifetime.

When you next find yourself in front of the Krause Music Store, look up!  You’ll notice the letter “K” for Krause in the middle of the cartouche at the top of the building. And though I don’t say it often – look down too. You’ll see the name “Krause” written out in black and white tiles at your feet.