The Art Institute: The Modern Wing

photo courtesy of Michelle Litvin for the New York Times

The opening of the Modern Wing in May of last year provided yet another example of Chicago continuing to be at the forefront of contemporary architecture.  Designed by starchitect Renzo Piano (leader of the Renzo Piano Building Workshop), it marks his second largest museum commission to date, the largest being the Centre Georges Pompidou in Paris for which he became famous.  The completion of the wing increased the size of the Art Institute by a third, making it the second largest art museum in the country (the first being the Metropolitan Museum in New York). 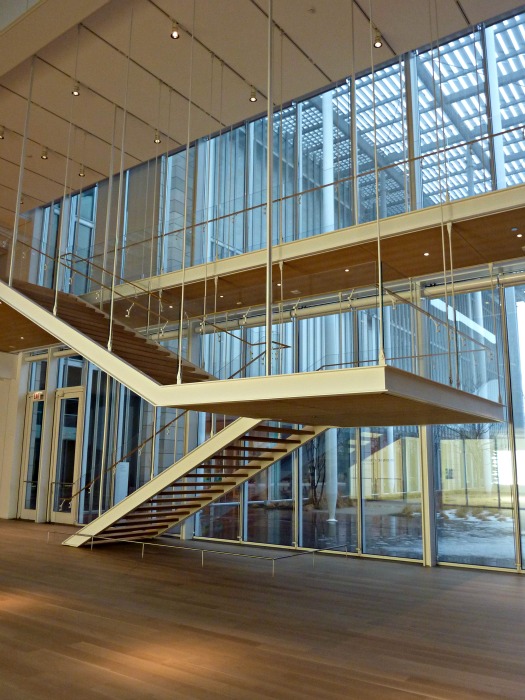 Piano has said, “architecture must fly: it is made of emotions, tensions, transparency.”  The Modern Wing seems to do just that.  The northern elevation is clad entirely in glass (in pieces so large that they had to be manufactured in Germany because no American company could fabricate the size), and Piano dubbed the canopy that hovers above the roofline the “flying carpet”.  The flying carpet is made of aluminum louvers or blades set at an angle inviting in soft northern light while protecting the upper floor galleries from harsh southern light.  The interior also soars with a staircase that hangs from above, and a sky-lit entry hall that looks like an airplane hangar or nave of a grand modern cathedral.

The wing is impressively contextual to its surroundings.  The transparency of the northern elevation welcomes views of Millennium Park, while the limestone clad western elevation corresponds to the limestone walls of the older Art Institute buildings which it faces.   While the historic wings of the AIC face the historic Michigan Avenue streetwall to the west, the Modern Wing faces the modern skyscrapers and Millennium Park to the north.

What physically connects the Modern Wing to Millennium Park is the Nichols Bridgeway.  A 625 ft. long pedestrian bridge, it turns Millennium Park into the sculpture garden of the Art Institute.  With its clean lines and railings it looks almost like the side of a ship, possibly inspired by Piano’s passion for sailing.

The most exciting element of the building might just be its least visible: its sustainability.  The AIC has been awarded the silver LEED (Leadership in Energy and Environmental Design) rating by the US Green Building Council for the Modern Wing.  It’s rare for a museum to attempt this rating considering the inescapable challenge and importance of climate control.  The building is clad in a double wall of glass with a buffer of space in between.  This “buffer” acts as a control from Chicago’s hot summers and cold winters, lessening the load on the cooling and heating system.  Light sensors in the galleries adjust the artificial light according to the brightness of the day outside.  Sustainability is one of the defining features of contemporary architecture, making the Modern Wing a cutting edge building – inside and out.