BLUEPRINT welcomes local architectural historian Matt Crawford as a guest blogger this week. He chose to write about a lesser-known building in Chicago, though one that tells an interesting story all the same  — St. Joseph’s Hospital. My hope is that it will inspire each of you to give it a closer look the next time you drive down Lakshore Drive . . . I know I will. 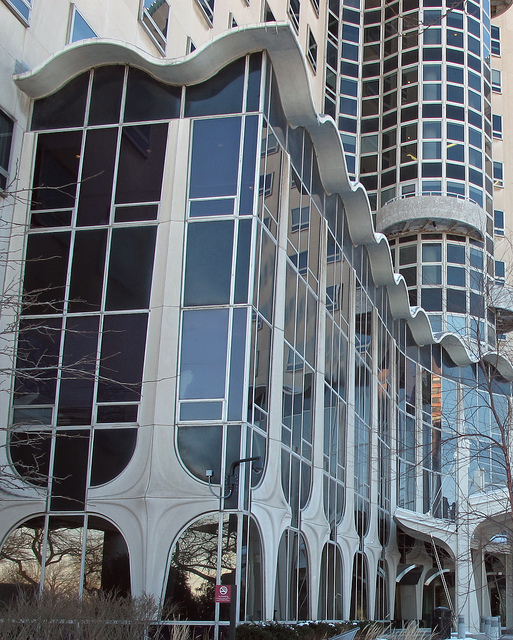 Located just north of Diversey, St. Joseph’s Hospital overlooks Lake Shore Drive.  St. Joseph’s was the warm refuge from the storm for hundreds of drivers who escaped their snowbound cars on the Drive last Tuesday night. This bit of news inspired me to write about one of my favorite buildings.

More Morris Lapidus than Mies, the design of St. Joseph’s is characteristic of Belli & Belli’s idiosyncratic, expressive and colorful take on mid-century modernism.  The form of the building consists of three slab-like wings clad in smooth limestone punched with a grid of window openings that provides patients with therapeutic views of Lincoln Park and Lake Michigan.  Perhaps it was the color of the lake on a clear day that inspired the extraordinary treatment of the wing ends which are clad in an eye-catching harlequin pattern of black and turquoise blue enamel panels.  The same pattern of blue panels also extends across the top of the building like shark’s teeth.

Unlike high-style modernists of their time, Belli & Belli did not limit their pallet of materials.  In addition to limestone and enamel panels, the design palette also includes a tinted-glass cylindrical curtain-wall that extends the full height of the front facade, and contains elevator lobbies and lounges on each floor.  Concrete balconies appear to slide out from this cylinder like drawers.  The main entrance to the hospital is located in a three-story pavilion with glazed curtain walls topped with a flamboyant scallop-shaped concrete canopy. 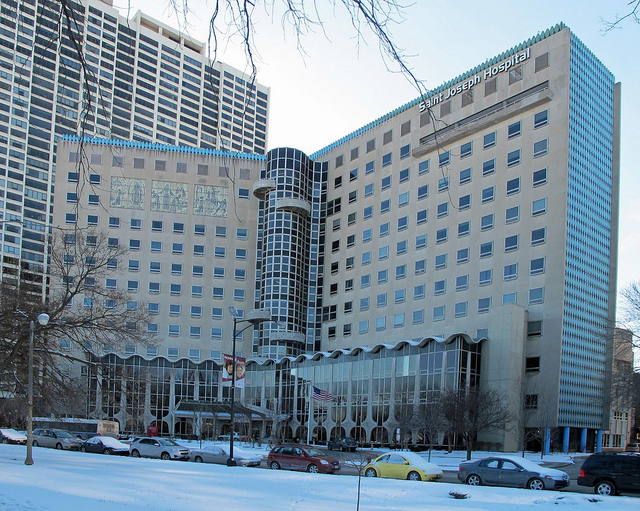 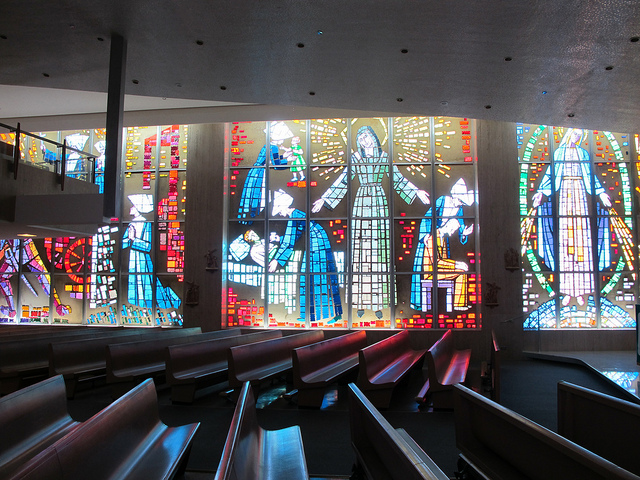 The AIA Guide to Chicago and the Chicago Sojourn blog have written about the boldly abstract and expressionist Daniel Ryan Chapel on the eleventh floor. It’s worth a visit. Yet even from the exterior, the dalle de vere stained glass walls of the chapels (crafted by the Tolleri Studio in Florence) give a hint of this jewel box space. 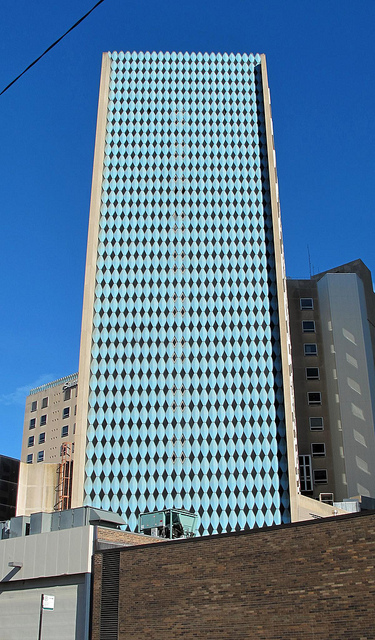 Architect Edo J. Belli founded the firm of Belli & Belli in 1945.  After graduating from the architecture program at Lane Tech High School in the middle of the Great Depression in 1936, he began an architectural apprenticeship with Henry K. Holsman. The compensation included a paycheck of $4.95 a week, free lunches, and tuition reimbursement for night classes at the Armour Institute in Chicago where Belli earned his Bachelor of Architecture in 1939.  After serving in the Navy during WWII, Belli founded his firm with his brother Anthony.  Belli & Belli was a small, family-run but prolific firm which received a great many commissions for Catholic schools, churches and hospitals in the mid-twentieth century in Chicago and abroad.

The hospital was commissioned by the Daughters of Charity, a Catholic order of women who had outgrown their 1871 hospital building on Burling Ave. south of Webster (demolished, now the site of Oz Park). The land was purchased in 1952, and in 1958 Belli & Belli began working on the design, however a NIMBY lawsuit filed by nearby residents delayed ground-breaking until 1961.  When the hospital finally opened in the spring of 1964, the Chicago Tribune described the 12-story 500-bed hospital as a “soaring symbol of health in modern Chicago.”

(All photographs for this article were taken by Matt Crawford).