The opening of the Auditorium Theater on December 9, 1889 was the grandest and most anticipated social event Chicago had ever seen. One after another, horse-drawn carriages pulled up to its Congress St. entrance emitting an endless stream of women in their most extravagant jewels and men in their finest tailored suits into the electrically lit theater. People cheered as Adelina Patti welcomed them with her rendition of the song “Home Sweet Home”. Special guest President Benjamin Harrison was rumored to have leaned over to Vice President Levi Morton and murmured, “New York surrenders, eh?,” temporarily ending a battle of greatness between the two cities (from Chicago’s point of view). The Auditorium Building was the biggest building in the country and the tallest in Chicago. The theater’s acoustics were the greatest in the world. At the time many referred to the Auditorium as the eighth wonder of the world. Its success was key in Chicago winning the commission for the World’s Columbian Exposition, and above all else it was what turned Chicago into a world-class city. 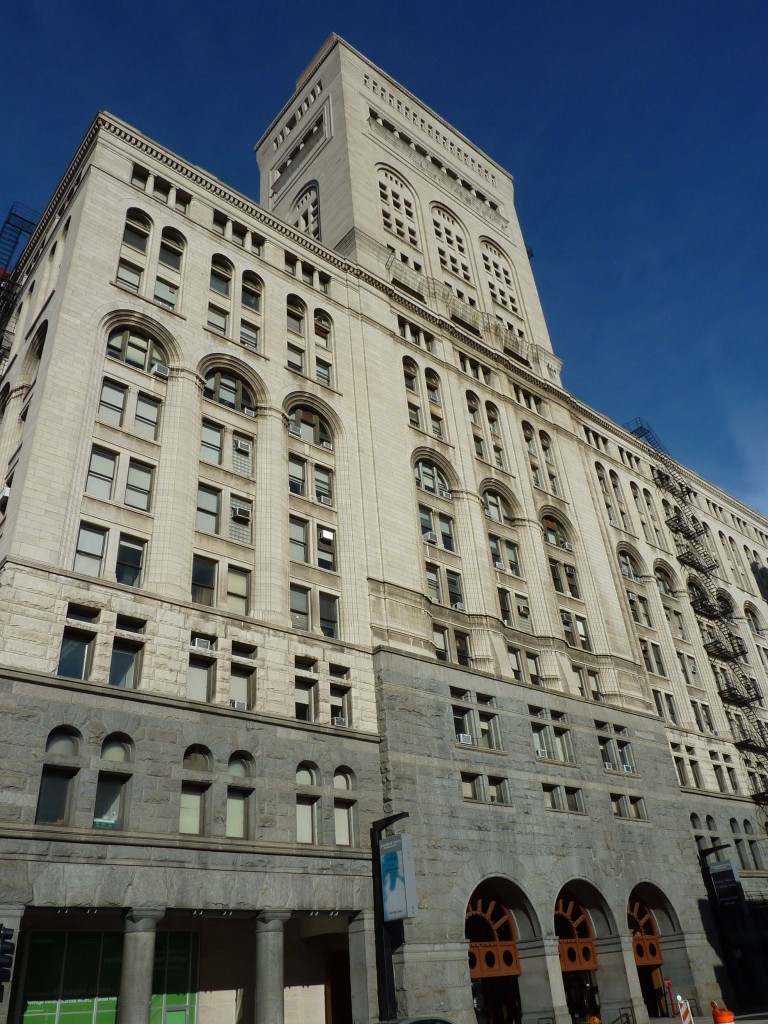 The idea for the Auditorium came from Ferdinand Peck, a wealthy Chicago businessman, wanting to build a cultural institution that would finally put an end to the city’s reputation for being a brawling, frontier town. An unrivaled home for the city’s opera company and symphony orchestra was the perfect solution. Knowing that it would be difficult to financially uphold his vision, he decided that the building should be multifunctional. He hoped that the theater would be financially supported by building a hotel on its eastern side and an office structure on its western side. He chose Dankmar Adler, a man he knew well as a self taught acoustical genius, to be its architect. Adler’s partner at the time was a little known man by the name of Louis Henri Sullivan. The Auditorium’s completion was the beginning of Sullivan’s celebrated career – a career that would eventually award him the (popularly used) title of America’s first modern architect.

Sullivan ultimately chose to design the building in the Richardson Romanesque style that is characterized by massive rusticated stone walls, heavy rounded arches and deeply recessed windows. The building looks heavy, and it is heavy. It’s a masonry load bearing structure, and was the tallest in the city until the completion of the Monadnock building three years later. 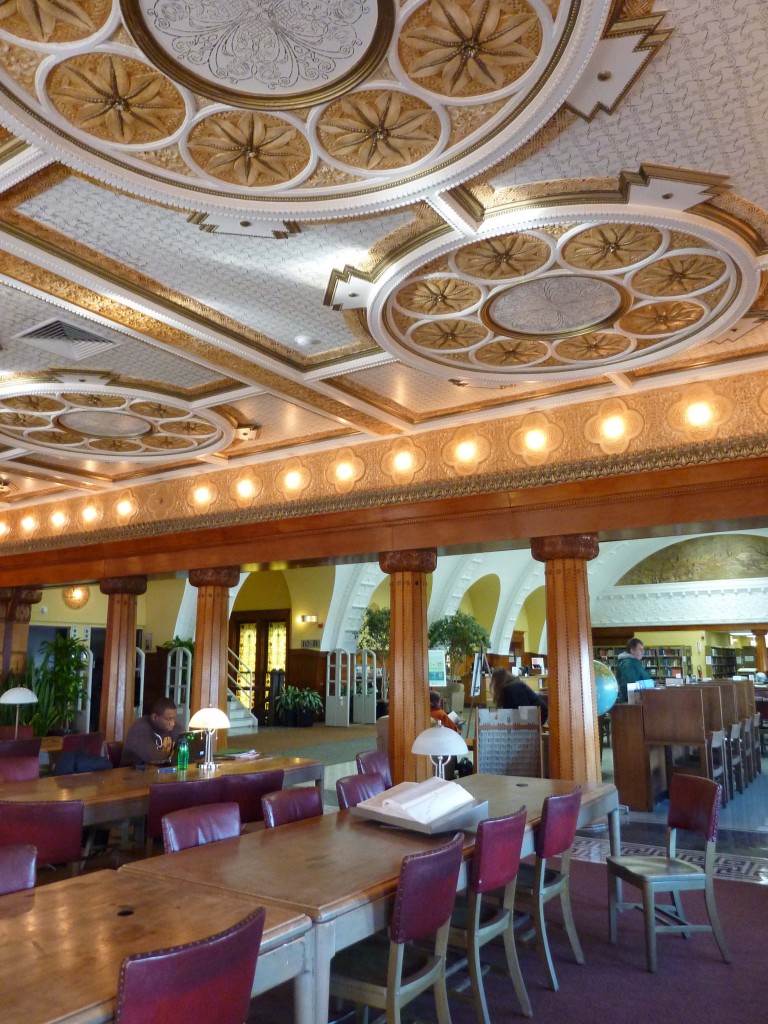 It is inside the building however, where Sullivan’s gift for design truly shines. Sullivan quickly became famous for his lavish nature-inspired ornamentation that is found in every nook and cranny of the Auditorium Building. It’s found in the mosaic floors, column capitals, within the stairs’ railings, adorning the walls, ceilings and light fixtures – few parts of the building were left untouched by the artist-architect Louis Sullivan. But Sullivan didn’t work alone, and though less visible, Adler’s contributions towards the Auditorium were of equal importance. While Sullivan handled the building’s visual design, Adler was responsible for its engineering and acoustical design. Adler had such insights as leaving the area above the theater’s wide arched ceiling hollow, and steeply inclining the seats. These details and more turned it into one of the most acoustically impressive theaters in the world.

Unfortunately it wasn’t long before the Auditorium began to struggle. One of its greatest selling points was also its greatest downfall – the theater’s unparalleled size. Seating 4,200 people, it was too large for either the Chicago Opera Company or Chicago Symphony Orchestra to fill the theater and maintain memberships. By 1904 the Chicago Symphony moved to its own smaller building, and the Chicago Opera did the same in 1929. The office portion of the building began to struggle as soon as the elevated lines were erected in its backyard in the early 1900’s. And the hotel, lacking in private bathrooms, became dated as soon as the Congress Hotel was completed – with private bathrooms for every room – in 1893. The Auditorium would have been demolished if the cost of demolition was not more than the land was worth. The theater began its descent into disrepair. 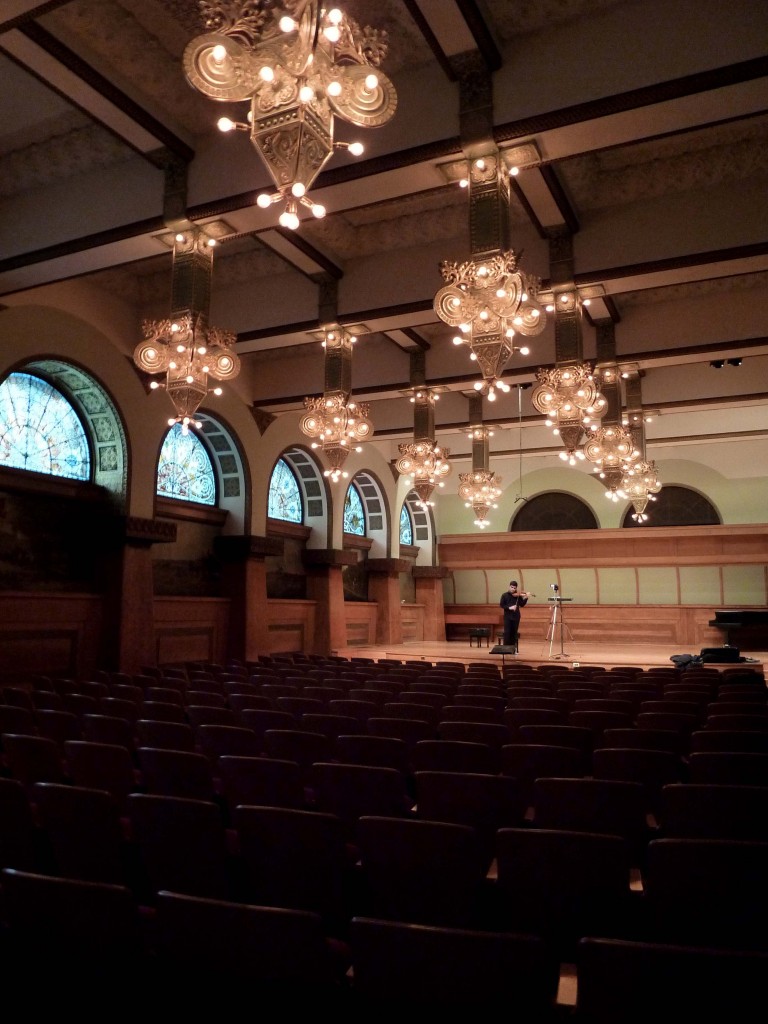 After serving as a WWII servicemen’s center from 1941 – 1945 (the stage was converted into a bowling alley), the Auditorium Building was sold in 1946 to Roosevelt University, who still owns it today. The theater portion of the building remained vacant and continued to deteriorate until a group lead by Beatrice T. Spachner saw to its restoration. The Auditorium Theater reopened on October 31, 1967 with the New York City’s Ballet Midsummer Night’s Dream – and it hasn’t closed since.  Let’s keep it that way.

Volumes of books have been written about this single building – going into far more detail than can be captured in a blog post. If you want to learn more about the Auditorium Building, an excellent starting point would be visiting the Auditorium Theater website. The Auditorium also offers impressive in depth tours of the theater.

Chicago has been celebrating Louis Sullivan through a number of events and exhibitions this year. The exhibition, “Louis Sullivan’s Idea” at the Cultural Center should not be missed. BLUEPRINT has also covered many other Sullivan buildings of note in Chicago, such as the Carson Pirie Scott building, Charnley-Persky House, Krause Music Store and the Holy Trinity Orthodox Cathedral.

The Auditorium is one of Chicago’s best-kept secrets. Treasures lie behind every door. Be sure to look for the Sullivan Room (floor 2), Ganz Hall (floor 7) and the Dining Hall – turned Library (floor 10)  . . . you won’t be disappointed (access through Michigan Ave. entrance).