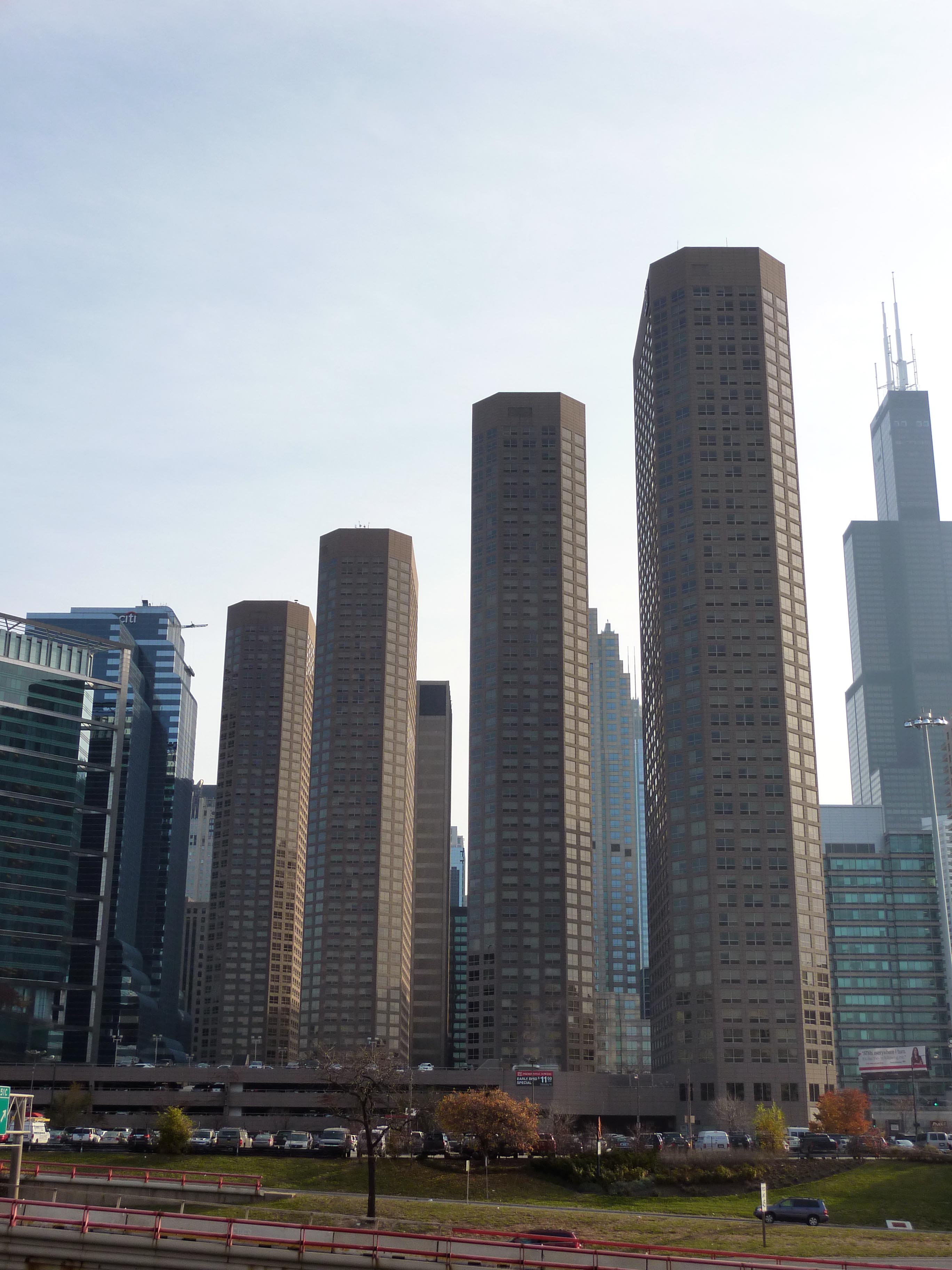 The story behind the Presidential Towers is not strictly about architecture. Instead, the four buildings tell a typical tale of Chicago politics — and all the greed, power and corruption you might expect from this city.

In the 1960’s the city demolished six blocks of low-income housing and single room occupancy hotels along Madison Street. 7,000 people were left without a home, to make room for five 90-story office towers that were never built. The land stood empty for years. Twenty years later, in 1986, came four 49-story luxury apartment buildings – one just like the other – called the Presidential Towers.

The buildings just over the highway and next door to the Presidential Towers offered a different reality. Housing projects, liquor stores, crime and people struggling to make ends meet was what defined the neighboring area. It’s no coincidence that the towers were built like a fortress. There’s a single entrance and security checkpoint for all four towers, and as you might expect it’s located in the tower closest to the safety of downtown. From there apartment dwellers take an escalator up to an elevated indoor pedestrian walkway connecting the buildings. Each tower is furthermore locked off from the other towers. What’s facing what was once the remainder of Skid Row? A barrier in the form of a large 3-story parking complex. The developers of the towers did everything they could to barricade the buildings from the surrounding neighborhood.

Pedestrian Walkways at the Presidential Towers

The buildings allowed apartment dwellers to further isolate themselves from the area by providing every imaginable amenity within the confines of the towers. The concept the architects of the Presidential Towers, Solomon, Cordwell, Buenz & Associates (SCB), had was to create an internal neighborhood within the complex. A supermarket, dry cleaners, floral shop, video rental store, and various restaurants were all contained within the buildings . . . not to mention an indoor swimming pool, exercise room, basketball court and running track. With so many conveniences within arms reach, there was little reason for those who lived in the Presidential Towers to ever leave the Presidential Towers.

The buildings were in great part made possible through hefty city and federal government subsidies. But thanks to Rep. Dan Rostenkowski (among others), the rules were bent so that the developers did not have to abide by the customary provision to set aside 20% of the apartments for low-income renters. Despite these favors, it wasn’t long before the development met with financial difficulties. In 1992 a $160 million bailout and refinancing of the Presidential Towers stipulated that 5% of the apartments would be allocated to lower income families. Today there are only a small handful of apartments reserved for low-income families. And it’s not surprising that now there are few signs of the urban blight that once marked the area. Instead, the West Loop is quickly growing to be one of Chicago’s hippest destinations.

Though the injustices represented by the Presidential Towers were once the source of public outrage, today their story is mostly forgotten. The protests ceased long ago and all that remains are the towers themselves. Though the general sentiment towards their design is as architecture critic Paul Gapp wrote, “banal by the most charitable description,” they’re still elegant in their own way.  One after the other, they’re rhythmic. And when the sun is setting, sometimes they even seem to glow.

The fight for equal housing opportunities is always present. One such struggle is found at the Lathrop Homes housing project. Recently announced were the plans to change the buildings from low-income into mixed-income housing. To learn more about the Lathrop Homes redevelopment plans read this.