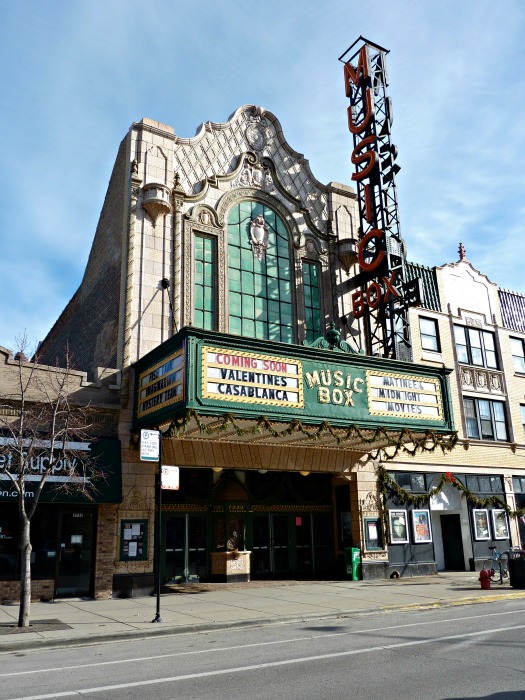 When the Music Box Theatre opened on August 22, 1929 it was hardly a newsworthy event or theater. It had no stage, sat only 800, and showed solely second-run films. Compare this with the fancy movie palaces downtown with big stages attracting even bigger stars, and seating 3,000 people (or the Uptown Theater which sat over 4,000). So no, the Music Box Theatre wasn’t anything special when it opened. But it is special today.

Most all of the Music Box’s old competitors, both big and small, have either been torn down, or are empty and threatened with deterioration. The Music Box stands strong as the current largest theater space operated full time in Chicago, and our premiere venue for independent and foreign films. Its heroic preservation is not the only story it has to tell. Today, the Music Box reflects the rapidly changing entertainment industry during the late 1920’s.

At the time, most theaters were built with large stages to showcase a mix of entertainment – both live and film. The Music Box was unique in that it was one of the first theaters in Chicago to forgo a stage. It was built to only show films. Sound films had just become popular – putting an end to the silent film industry. Not everyone was happy about this transition though. Silent films held a place in people’s hearts, and some were convinced that they were destined to make a comeback. That’s why the Music Box made provisions for installing a pipe organ for when silent movies came back in style at a later date (however, that date didn’t come until the 1980’s when an electric organ was installed). Therefore, the design of the Music Box reflects the dramatic changes occurring within the movie industry 80 years ago.

Today films are shown in full color, sometimes animated or even in 3D (with glasses). Despite all of these changes (and more) to the film industry the Music Box is still known for its classic aura. Designed by  architects Louis I. Simon and Edward Steinborn, the Music Box is a complete hodgepodge of architectural styles. A little Spanish, a little Italian, it’s got a little of everything.   The focal point of the ornate terra-cotta façade is a false, though convincing, Palladian window clad in green tiles. Original to the building is the commanding “MUSIC BOX” vertical sign visible from blocks away.  Sitting in the grand auditorium before film screenings, the audience is taken back into time listening to the organist play with stars twinkling above.

The Music Box is a reminder of the potential in all of our old movie theaters to be restored to their original grandeur for creative new purposes.

For more information on preservation efforts for our endangered movie palaces visit these sites: Forgotten Chicago and the Uptown Theater.